And now, for a little story about a couple of cyclists. 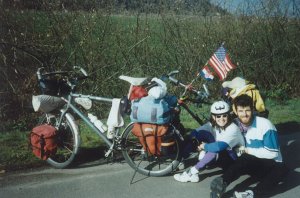 Back in September 1994, Ann set off for a biking adventure that was supposed to take her from Whitehorse, Yukon, down the Stewart-Cassiar Highway to Vancouver, BC. Despite warnings that it was dangerous for a gal to cycle alone on such an isolated highway, she was determined to succeed. Loaded down with gear, she sped down the highway looking for adventure. 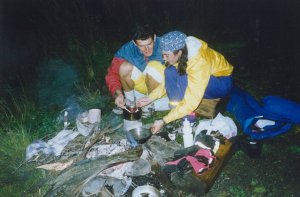 It was cold. It was rainy. It was lonely and remote. The snow was moving down the mountains and dusting her tent with frost in the morning. It was exactly what she was looking for. Then a car stopped. The driver wanted her to know that there was ‘some guy’ on the highway looking for her. She was from Ontario, no one knew her here. Must be a freak – better peddle faster and get to a town. But instead, she found Mighty Moe’s place. A nutty character, his white beard split in two pony tails and cash stuffed in his pillow cases, Mighty Moe said “Babe, you can stay on this winter and be my nurse!”

Meanwhile, Ante was peddling his way along the same highway. He too had been told not to cycle the Stewart-Cassiar Highway in the fall. He politely took the advice and proceeded down the highway anyway. Then, he was stopped by a car.  “Hey, young fella, you better slow down, your girlfriend is falling way behind ya” the American tourist told him. “Humm”, he thought to himself, “this sounds interesting”. And so, he stopped and waited along the highway to meet this gal. After standing in the rain for three-and-half hours, he stopped the first car he saw. The driver told him, the cyclist was at least an hour away. So Ante ran back to the cabin he was staying at, warmed up on some moose stew, changed his clothes and went back out. He later realized that she’d cycled passed him. 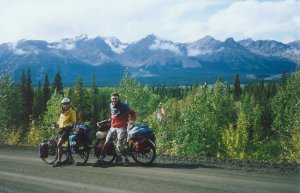 It was the next day, as Ann looked out across Cotton Lake contemplating a winter as Mighty Moe’s nurse maid, that she spied a cyclist peddling her way.

And the rest, as they say, is history! 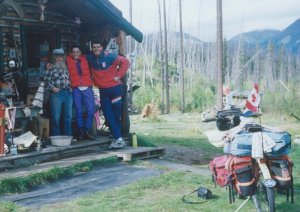 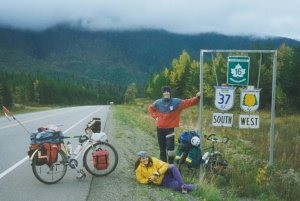